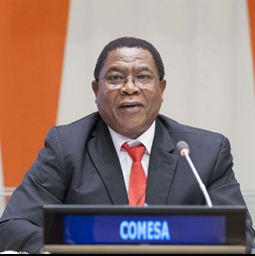 Retired Secretary- General and CEO of the Common Market for Eastern and Southern Africa (COMESA).

H.E. Mr. Sindiso Ngwenya is the fifth Secretary- General of the Common Market for Eastern and Southern Africa (COMESA) since it was transformed from the PTA in 1994. He brings with him over 30 years of service in industry, regional and multilateral levels covering the public sector, private sector and quasi-government institutions.

Before his appointment, Mr. Ngwenya was the Assistant Secretary General of COMESA in charge of Programmes a position he held for ten years. In this position, he was responsible for overseeing the development and implementation of COMESA programmes. In addition, he oversaw and supervised the operations of COMESA established institutions such as the Leather and Leather Product Institute (LLPI), the Clearing House and the Regional Investment Agency.

In industry, Mr Ngwenya was involved in the design and implementation of programmes and projects in the road, airline and railway sectors. At the regional level, he was instrumental in the formulation of the PTA (now COMESA) regional integration programmes culminating in the launch of the COMESA Free Trade Area on 31st October 2000. He also worked on the establishment of COMESA specialized institutions, such as, the Eastern and Southern Africa Trade and Development Bank (PTA Bank), the COMESA Clearing House and the PTA Re- He has edited two books on transport and communications and public service and is a regular contributor to several publications on economic cooperation and integration. He has also won many awards in recognition of his contribution to social and economic development and regional integration. In 2010 he was the winner of the Southern Africa Trust Drivers of Change award in the Government category and was cited by Judges for “His dedication to poverty eradication and equitable development in Africa through enabling broader markets by business. Through his leadership, a future is being crafted out for Africa that looks promising ”

In addition to serving as Secretary General and Chief Executive Officer of COMESA , Mr Ngwenya sits on the following boards within Africa and internationally: 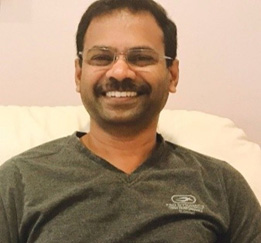 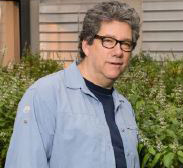 Alfred Chipoya
Chairman Board of Directors

Alfred Chipoya is the Board Chairman of AgriSmart Zambia and one of the co-founders. He studied in Cambridge and achieves Cambridge Full Certificate (1978). His qualifications includes:

Since 2014 Mr. Chipoya focus his energy on social development projects and co found AgriSmart in 2015 to develop the agricultural sector in Zambia and to diversify the Zambian Small holders farmers from maize production to more high value horticultural crops.

Dr. Govindasamy is serves as the Chair of the Department of Agricultural, Food and Resource Economics, Rutgers University. He has developed an effective, nationally and internationally recognized program of research and scholarship leading to over 100 refereed publications, 150 professional presentations, plenary and invited talks and 45 external research grants. Because of his accomplishments, Dr. Govindasamy was elected in 2004 as the Chair of S1019, National Research Committee that focuses on the issues relating to fruit and vegetable marketing in the U.S. He also served as the editorial board member for the Agricultural and Resource Economics Review and The Journal of Food Distribution Research Society. Dr. Govindasamy was awarded the Presidential Emerging Leadership Award by the Food Distribution Society in October of 2004 and was elected to serve as the president-elect of the association in 2016. In the past ten years, Dr. Govindasamy’s research program has been supported by external grants and contracts of over $11 million from over 10 sources.

3. Short BioSketch of Prof. Simon’s Research, Extension and Development Activities:
Simon serves as the Director of the New Use Agriculture and Natural Plant Products Program, Rutgers University, which seeks to identify new crop opportunities, new applications of bioactive and nutritious plant compounds and new products from fruits, vegetables and herbs including nutraceutical, bioactive and cosmetic ingredients. Simon has been collecting and breeding high value crops (culinary herbs, specialty peppers) for over 20 years, for aroma, taste and nutrition and disease resistance. His international work in high value crops is well known and uses his market-first science-driven models to commerialize traditional and ethnic/indigenous fruits & vegetables and botanicals. His expertise includes quality control, GlobalGap from the raw materials through product standardization, processing, and new applications of plant extracts for foods, health and nutrition, nutraceuticals, and protodrugs with a focus on exploring and helping communities develop and preserve their indigenous natural resources. Internationally, Simon began conducting collaborative research in sub-Sahara Africa over 25 years ago; he was an original author for the WHO Guidelines on Good Agricultural and Collection Practices (GACP) for Medicinal Plants and has considerable experience in sub-Sahara Africa (Cameroon, Ghana, Liberia, Kenya, Madagascar, Malawi, Namibia, Rwanda, Senegal, South Africa, Tanzania, and Zambia) and Israel that has lead to significant economic development for communities and commercial farmers by the introduction into commercialization of high value crops. He was the 2012 winner of the BIFAD award for research excellence and impact for USAID CRSP programs. Simon’s strength and interest is in bringing together multi-discplinary teams of faculty, universities and the public and private sector into strategic partnerships that build new or strengthen ongoing international programs and encompass the entire ecosystem and in ensuring economic, environmetnal and social sustainability with new enterprises. Simon has helped others to design and form new NGOs operating in sub-Sahara Africa, including AgriSmart and for this project initiative will serve as lead scientist and a technical expert.

4. A few select Awards & Honors Relevant to this Project:
2017: The Chancellor’s Award for International Impact, Rutgers, The State University of New Jersey
2015: Women of Nsongwe: A documentary (https://vimeo.com/127078444) produced by the Rutgers Digital Filmmaking Program on Simon’s international program in Zambia.
2014: Special Service Award, Association for International Agriculture & Rural Development
2013: International Excellence Award Recipient for 2013, School of Environmental and Biological Sciences. Rutgers, The State University of New Jersey
2012: Recipient of the 2012 Award for Scientific Excellence by a researcher in a USAID Collaborative Support Research Program. The Board for International Food and Agricultural Development (BIFAD), USAID.
2012: Recipient of the 2012 Burton Kallman Scientific Award, Natural Products Association. This award recognizes individuals who have made outstanding scientific contributions that have benefited the natural products industry.
2012: Recipient of the 2012 Northeast US University’s Cooperative Extension Service Directors Award of Excellence.

6. Scientific and industry books and proceedings= >12

George is an Agricultural Economist and brings more than 20 years of working experience as a value chain facilitator. In addition, he has experience in developing models and tools to improve efficiency throughout the agricultural marketing chain,that is from producers to end-markets through agro-dealer development and related networks. His work has seen him exploring farmer market linkages working to offer opportunities for improving smallholders’ marketing. George is currently the Director of Trade and Markets for COMESA under the Alliance for Commodity Trade in Eastern and Southern Africa (ACTESA) situated at the COMESA Secretariat in Lusaka Zambia. George further chairs the Markets and Regional Trade Network under the African Union Commission.